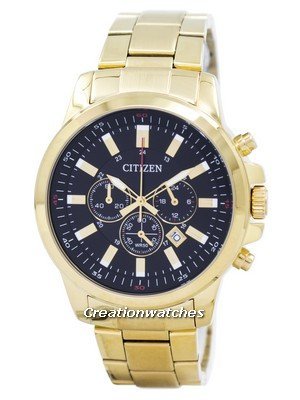 It feels good to embrace the technicalities that come with the Eco-Drive but at the same time, it’s also true that Eco-Drive brings the added complexities that cannot be rectified by anyone other than Citizen’s own team if anything goes awry. Alongside, they also shoot the price up by several times which, sometimes exceeds the budget of someone willing to sport a Citizen watch on his wrist. Enter the Citizen Urban Chronograph Quartz AN8082-54E Men’s Watch with all the goodness of an Eco-Drive chronograph but uses a battery as the power source instead of light.

The Citizen Urban Chronograph Quartz AN8082-54E Men’s Watch exhibits an effortless style that makes it a perfect everyday timepiece but added with a stopwatch and an AM/PM denoting mechanism. It will never require your attention apart from the time it will need a battery change, which you’ll know from the jumping seconds-hand covering two seconds at a time instead of one.

The Citizen Urban Chronograph Quartz AN8082-54E Men’s Watch manages to exceed personal expectations regarding delivering both character and style. It adheres to a particular trendy style but is also not to be considered gaudy for formal or daily-wear purposes. The black and gold combination is always a hit and the trendy demeanor makes itself visible in a very subtle way, making it quite a bit snob-worthy. There’s nothing poor about its material and construction quality; it feels solid both on and off the wrist and appears cool without trying for it. Same goes for Citizen’s own in-house manufactured quartz movement inside; it is a reliable and accurate piece built tough to handle more than the impacts and vibrations it might face within an urban setting. Thus, to sum it up all:

The Citizen Watches for Men balances messaging with substantiality, making it worthy of attention from those who appreciate watches in its real sense.

Bottom line: The Citizen Sports Chronograph Quartz Men’s Watch is the brand’s offering to everyone who wants the Japanese brand’s legendary qualities at a lower price but without sacrificing the aspects that Citizen is famous for. It is nothing less than the brand’s Eco Drive offerings apart from that it is powered by a regular battery instead of the energy obtained from light.