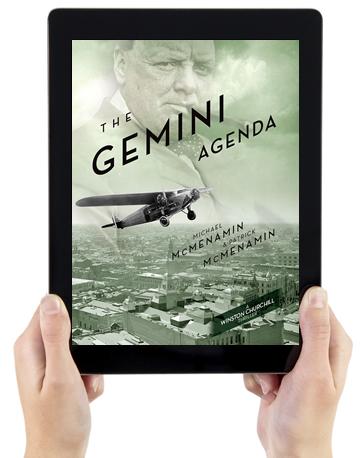 A new eBook edition of The Gemini Agenda by Michael McMenamin & Patrick McMenamin continues the award-winning series of Winston Churchill Thrillers weaving history, intrigue, thrills and romance during the era leading up to World War II. The 3rd novel in the series, it was a 2012 Grand Prize Winner-Fiction in the Next Generation Indie Book Awards and named both a 2012 Historical Fiction Book of the Year Finalist and a 2012 Thriller/Suspense Book of the Year Finalist by ForeWord Reviews.

Cleveland, OH, USA — In 1932, Winston Churchill has ominous intelligence from a confidential source in Germany. Across the United States, naked bodies, drained of blood, their eyeballs extracted, appeared at ten remote locations. A serial killer? Or something worse? Churchill’s source believes the answers may lie in Germany.

Churchill informs William Randolph Hearst who assigns his best journalist, Mattie McGary, Churchill’s risk-taking Scottish goddaughter, to investigate. Together with her lover, the lawyer and ex-military intelligence agent Bourke Cockran, Jr., they become the target of an international conspiracy that ranges from Wall Street to Washington, DC; from Long Island’s fabled Gold Coast to the marble corridors of the Barlow Palace in Munich, headquarters of Adolf Hitler’s fast-rising Nazi Party that is poised on the cusp of power.

Mattie’s discovery in America that all ten victims were twins leads her to learn that there are ten more missing twins for whom “autopsy protocols” will begin in Bavaria in just ten days. Mattie and Cockran embark for Germany on the famed airship the Graf Zeppelin in a race against time to locate and save the twins. In Bavaria, they combine forces with unlikely allies leading to a sinister Nazi clinic in the Bavarian National Forest near the small border town of Passau where Hitler lived as a child. Once there, they uncover an unspeakable alliance between Wall Street-funded American eugenicists and Nazi scientists to conduct lethal experiments on American twins in order to unlock the secrets to creating a master race.

Michael McMenamin is the author of the critically acclaimed Becoming Winston Churchill, The Untold Story of Young Winston and His American Mentor. His son Patrick McMenamin is an award-winning journalist who has produced stories for ABC News, Fox News, HuffPost and Buzzfeed.

The ebook version of The Gemini Agenda, a Winston Churchill Thriller ISBN 9781506906065, published by First Edition Design Publishing (http://www.firsteditiondesignpublishing.com), is available on-line wherever ebooks are sold.