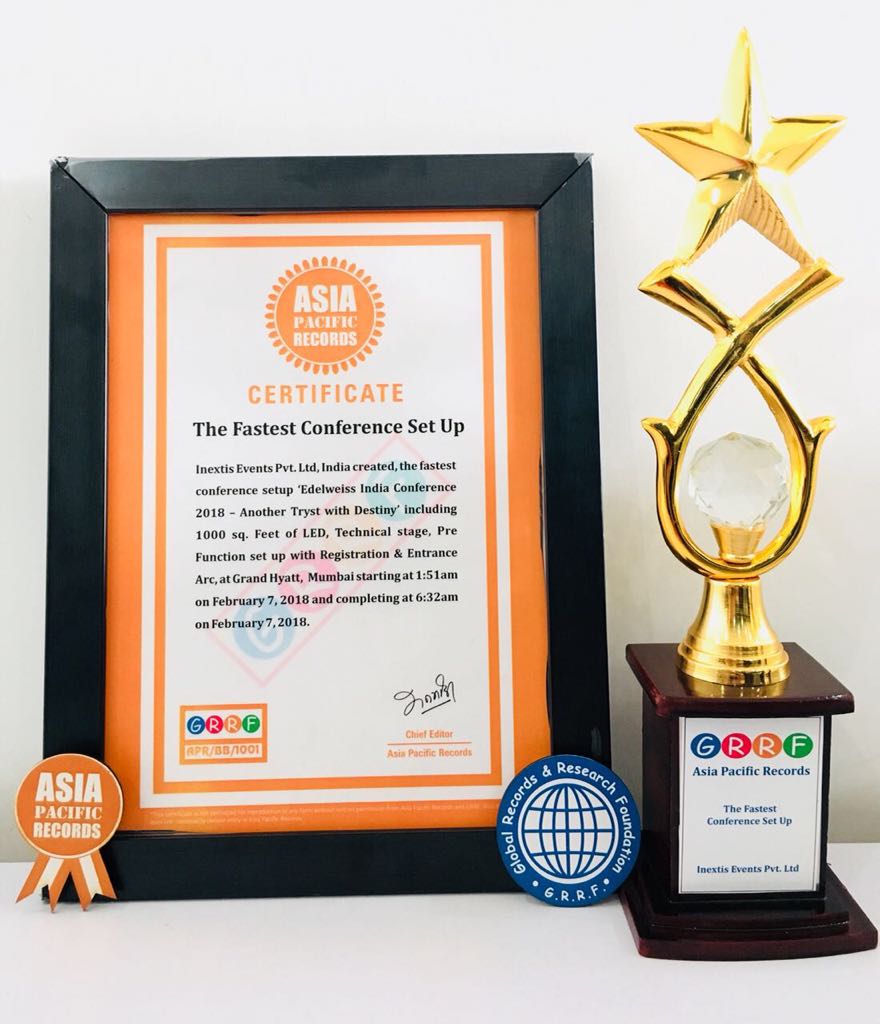 28th May 2018, New Delhi: 5 years old company, but big list of achievements, today Inextis Events is inspiring various young entrants in the event industry with its unmatched services and creative event list. Adding another laurel to the big list of achievements, Inextis has created a history again by entering into Asia Book of Records, second time for ‘The Fastest Conference Set Up’ for Edelweiss India Conference 2018, recently.

The event that has created an impact was attended by more than 250 attendees, 150 corporate firms and Edelweiss clients included more than 500 attendees from 206 firms, including 60 FIIs from the US, UK, Europe and Asia-Pac.

Talking about the achievement, Dhruv Davar, CEO, Inextis Events shared, “It is a moment of great pride for Inextis. Creating history with something you love doing, is a different high. It encourages us to challenge our own self and set bigger benchmarks”.

The event setup included a 1000 sq. ft. of Curved LED screens, a circular Stage in the centre of the banquet hall with a life sized in-lit letter cut placed behind the stage and in front of the centre LED, followed by the console, 2 media rooms setup, gensets and a goal post truss for lights, sound and all video equipment. The set-up also included a 3D edge lit layered registration desk, an entrance arch, 2 engagement zones and a Live Twitter Tree LED wall in the pre-function area. All this was done in 4 hours & 41 mins, which enabled them to make a place in Asia Book of Records.

Inextis entered Asia Book of Records for the first time with Fantastico Tiago Drive campaign by Tata Motors in 2016. Inextis Events have also won various other reputed awards in 2017 including an Apex Award for The Best Marketing Startup of the Year by Masters of Modern Marketing – mCube Awards 2017, ’Tata Zest Record Run Campaign’- Best Multi Channel campaign by/for an Automobile enterprise, EEMAX Award for the ‘Best use of Digital Marketing for an Event or Activation’ for the same campaign, Innovative Performance Marketing Award at Center Of Individual Networking Summits 2017, 4 Certificates of Appreciation from Foxglove Awards 2017 and the list goes on.

The company, which has grown multiple folds since their inception has 98.4% client retention, which is very difficult keeping in mind that event industry doesn’t work on retainership model, where the chances of retention are huge. Apart from this the company is also doing unique events for the big corporates & and fortune 500 companies.