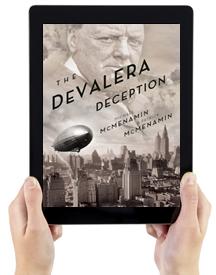 A new eBook edition of The DeValera Deception, by Michael McMenamin & Patrick McMenamin, begins the award-winning series of Winston Churchill Thrillers weaving history, intrigue, thrills and romance during the era leading up to World War II. It was a 2010 Grand Prize Winner-Fiction in the Next Generation Indie Book Awards and named both 2010 Historical Fiction Book of the Year and 2010 Thriller/Suspense Book of the Year by ForeWord Reviews.

Cleveland, OH, USA — In the summer of 1929, Weimar Germany’s secret military agreement with the USSR to develop new weapons systems beyond the Ural Mountains is coming to a critical point. Both countries want to dismember the newly revived Poland in a war of revenge To distract Britain from helping the Poles, the new Irish Free State is placed at risk by the arms dealers and financiers of the shadowy “Geneva Group” intent on fomenting an IRA coup d’état In Ireland with weapons and munitions purchased in America.

British Prime Minister Ramsay MacDonald gives Winston Churchill a secret assignment on his 3-month holiday in North America. Aided by agents from MI-6, Churchill is to persuade President Herbert Hoover to prevent the IRA weapons purchase from reaching Ireland. Suspicious of the anti-Irish bias of MI-6, Churchill assembles his own team to gather evidence.

One is Mattie McGary, Churchill’s goddaughter, an risk-taking photojournalist for William Randolph Hearst’s media empire. Another is Bourke Cockran Jr., a law professor, former military intelligence agent, and the son of Churchill’s old Irish American mentor. Attracted to each other, romance blooms, but their tempers often clash as the two follow a danger-filled trail from New York to Montreal, Cleveland, Chicago, San Francisco and Los Angeles to discover who is funding the IRA and where the arms are being assembled. Along the way, they receive help from such colorful historical characters as Irish revolutionary leader John Devoy; Chicago gangster Frank Nitti; future head of the OSS, William J. “Wild Bill” Donovan; the legendary Jack Manion, head of San Francisco Police Department’s Chinatown Squad; William Randolph Hearst; and, of course, Winston Churchill himself.

Michael McMenamin is the author of the critically acclaimed Becoming Winston Churchill, The Untold Story of Young Winston and His American Mentor. His son Patrick McMenamin is an award-winning journalist who has produced stories for ABC News, Fox News, HuffPost and Buzzfeed.

The ebook version of The DeValera Deception ISBN 9781506906058, published by First Edition Design Publishing (http://www.firsteditiondesignpublishing.com), is available on-line wherever ebooks are sold.