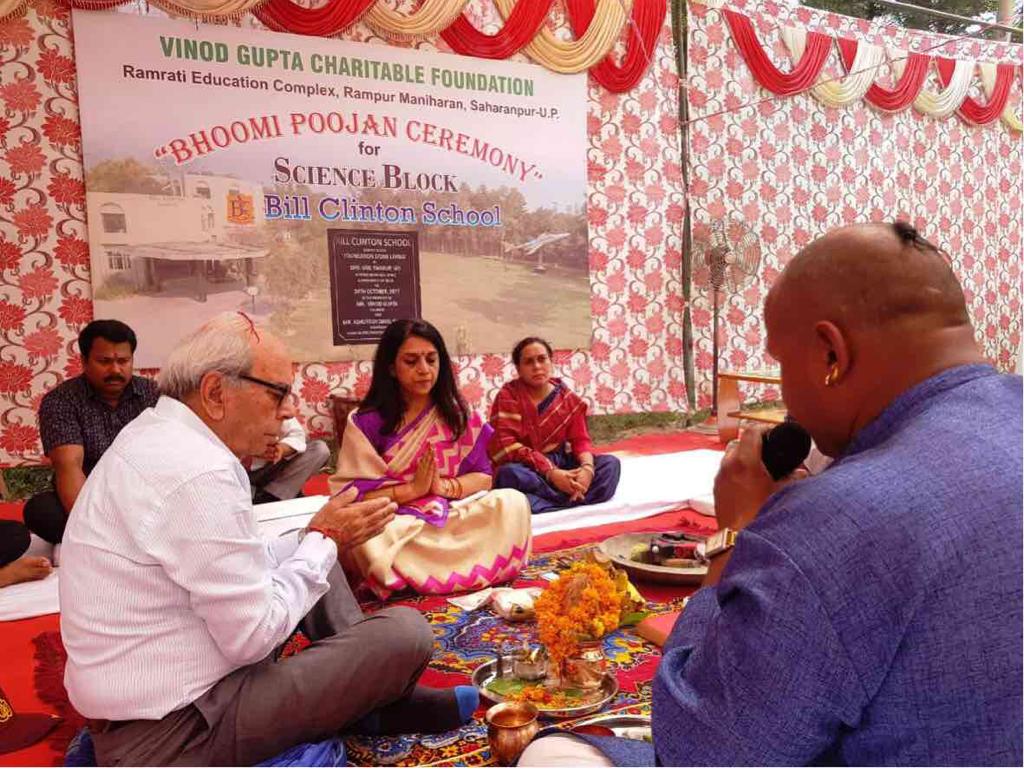 Bill Clinton School was established in 2007 as a Primary School and gradually it was made into a Middle School upto Class 8th. The Foundation thereafter received the acceptance letter in 2015 by CBSE to add classes 9 to12.

Speaking at the occasion, Mr. Ashutosh Dayal Sharma, Chairman, VGCF, said, “We are happy to provide modern facilities in the Upcoming Science Centre, which will fulfill the long-standing requirement of the High School Students. VGCF is trying to create more space by providing additional Class Rooms, Large Laboratories for Physics, Chemistry, Biology and Computer Science. This will give the desired impetus to further strengthen Student Education in the Region and benefit Rampur and adjoining areas like Saharanpur, Shamli and Deoband.

He further added, “We want to provide all modern education facilities to our students at Bill Clinton School and are hoping to see many Engineers, Doctors, Scientists who would be the product of our School. The construction of the New Science Center is planned to be completed in 2020.”

Vinod Gupta, Foundation, VGCF, a well known Philanthropist, sanctioned over Rs 7 Crores to construct a Science Center. The Science Center shall comprise of 2 Computer Labs, 1 Maths and Language Lab, besides Physics, Chemistry and Biology Labs and 14 Class Rooms. It shall also have Student’s Recreation Room, Teacher’s Room and a Reception.

The New Science Centre has been designed by well known Architects from Delhi.

About Vinod Gupta Charitable Foundation
Vinod Gupta Charitable Foundation, (VGCF) is an amalgam of devoted hands and strong minds for providing outstanding quality education to the next generation. The overarching aim of the foundation is to empower women and girls of marginalized groups through sustainable initiatives in the field of education, which will enable them to be economically and socially secure. It was started as a society under the Societies Registration Act XXI of 1960 in Delhi on 4th July, 1997. The foundation is first in introducing non-technical education in IIT, Kharagpur. Vinod Gupta School of Management and Rajiv Gandhi School of Intellectual Property Law are such significant projects set up by the foundation in IIT, Kharagpur. Besides this, many educational institutions were established and run through charity activities of the foundation. While Ramrati Education Complex at Rampur Maniharan in Saharanpur Dist is run by the foundation itself, Dr Giri Lal Gupta School for Public Health and Dr Shanker Dayal Sharma Institute of Democracy in the campus of Lucknow University were established by the foundation and subsequently handed over to the university.
The foundation is named after its founder Mr Vinod Gupta, an NRI and now a well established entrepreneur in United States of America. He was born on 4th July, 1946 in Rampur Maniharan, Uttar Pradesh and after completing his B tech from IIT, Kharagpur, he left for America to pursue his higher education and then permanently settled there. The Board of Governors of the foundation comprises of eminent people. The Chairman, Mr Ashutosh Dayal Sharma is the Chairman of Quest V.C Pvt Ltd and son of former President of India Dr Shanker Dayal Sharma, and Mr BK Goswami, Member Board of Governors and its first Chairman, is a Retd IAS and former Chief Advisor to Govt of UP and J&K.