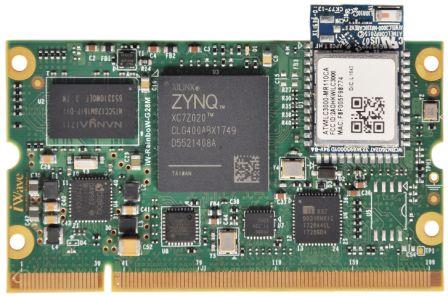 Zynq-7000 programmable SoC family integrates the software programmability of an ARM®-based processor with the hardware programmability of an FPGA, enabling key analytics and hardware acceleration while integrating CPU, DSP, ASSP, and mixed signal functionality on a single device. The iW-RainboW-G28M (Zynq 7000 Board) is a featured-full and ready to-operate embedded software and advanced circuit development kit worked around the smallest member from the Xilinx Zynq-7000 family, the Z-7010.

The Zynq-7000 SOM /Development Kit is based on the Xilinx All Programmable System-on-Chip architecture, which firmly incorporates a single / Dual Cortex A9 @ with Xilinx 7-series field programmable gate array (FPGA) logic. At the point when combined with the rich set of media and connectivity peripherals accessible on the Zynq 7000 SOM, the Zynq Z-7007S, Z-7014S, Z-7010, Z-7020, can host an entire design system.

Memories, 512MB DDR3 (Expandable to 1GB) or 512MB NAND Flash (Expandable), that are on-board, video and sound I/O, USB 2.0 OTG, Gigabit Ethernet and SD (4bit) will have your board up-and-running with no extra hardware required. Moreover, PMIC with RTC bolster connectors is accessible to put any design on a simple development way.

The iW-RainboW-G28M gives an ultra-cost to embedded designers that don’t require the high-thickness I/O of the FMC connector yet at the same time wish to use the enormous preparing force and extensibility of the Zynq AP SoC architecture.
This Zynq 7000 load up, a Business Card sized little module is a contemporary Market Solution that empowers you to execute different mechanical systems on a single platform. Furthermore, it accompanies on-board NAND flash, DDR3 RAM, Wi-Fi, BT and Gigabit Ethernet for supporting adaptable topology. This Zynq 7000 SODIMM SOM is available for large scale manufacturing utilization also in the event the buyer is interested.