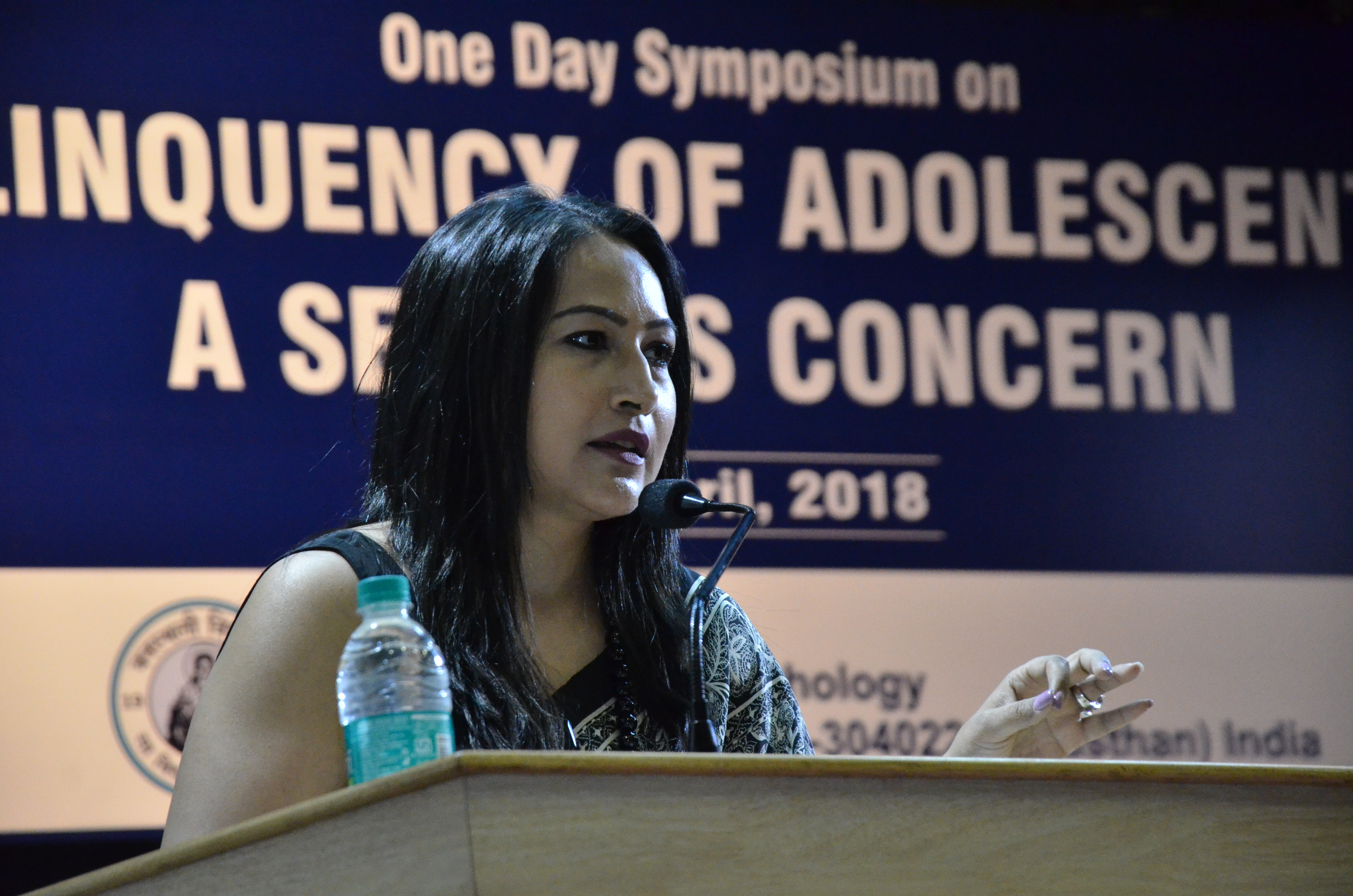 The Department of Psychology, Banasthali Vidyapith, Rajasthan organized a one-day symposium on 15th April 2018. Criminal Psychologist Mrs. Anuja Kapur graced the occasion as a Guest Speaker and enlightened the students and the society on the topic, “delinquency of adolescents: A serious concern.”

This session was conducted to be adopted a focused approach to stop the crime by juveniles.As an endeavor towards it, they have initiated a one-day symposium for all their students and employees.

The minute an individual is born they are being structured to the norms of the society.Everybody will behave and act in the manner they have absorbed over the years. So the matter of fact is, that if any individual has experienced a childhood with rage, negativism, beatings and rejection as the norm, then the chance for a vicious cycle of violence is possible. Such children usually grow up thinking that’s the way that you should act/behave, unless someone who cares intervenes and guides us in the right direction in life. Helping us distinguish between the right and wrong. As stated in the differential association theory formulated by Edwin Sutherland who observed that the ability and proficiency required for criminal act are not innovations automatically inherited at at birth rather it is a learned behaviour that a child picks up throughout. It is the association and interaction with others that individuals adapt and act the behaviour, mannerism, methods, and motives for felonious behavior. Inclusive of all the emotional disorder anger and frustration associated with adolescence, some teenagers turn to criminal activity for these purposes and as a reaction to their offensive childhood. Severely damaged with an immediate requisite of a correctional course in life these young juveniles need to feel loved and appreciated in their childhood.

In words of Mrs. Anuja Kapur, Famous Criminal Psychologist said, “There is a constant change in social environment and a recent spurt in the crimes by juveniles. On one hand, the widening of rich-poor divide in metropolitan areas and loss of innocence has been pushing minors from poor sections of society into the world of crime, the children from well-do –families are also gradually stepping in the world of crime. The main factors are peer pressure, extravagant lifestyles, too much liberty from the parents and even simple curiosity are leading to these perilous trends among the adolescents in India which needs to be stopped with serious attention. ”

She further adds, “Rectification of Delinquency in adolescence can be achieved if children somewhere along the line have a positive role model in their life who also is compassionate and appreciative towards them. A person whom they can look up to and want to be like in the years to come. Regret in the latter stages of life are non responsive as when the time was available no corrective or strict measure was taken against the unacceptable behaviour by the parents or the guardians.The juvenile justice system has been evaluated as noncurrent and ineffective in dealing with the measure and nature of teen crimes happening today. Juvenile homes are not considered safe for children anymore due to the current corruption level, as children often fall prey to child trafficking and abuse in there. Also the cumbersome caseloads of probation officers in many urban cities makes it unfeasible to keep course of juveniles adequately. Addition of probationary officers to the system is the need of the hour. Correctional facilities and restorative need to be implemented in order to help the adolescent realise how they have affected and maimed the lives of sweet and innocent people which is not only wrong but also unacceptable and unforgiveable. Restorative justice is a conceptualisation to justice that individualise the crime by having the victims and the offenders arbitrate a compensation of damages agreement to the satisfaction of both parties and the society as well. “