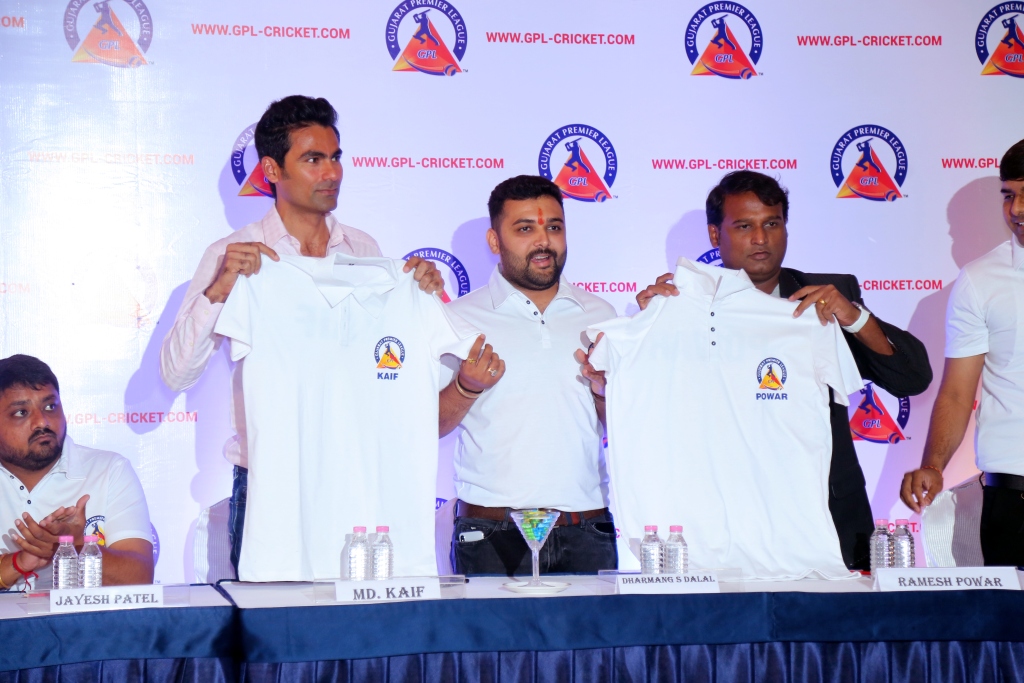 New Delhi, 3rd April 2018: The inaugural edition of an unprecedented state and franchise-based T20 tournament, Gujarat Premier League(GPL) 2018 was announced today by the cricket legends of world cricket- Mohammad Kaif and Ramesh Powar. The ex-cricketers shared that they will be featuring in the inaugural edition, which will be played in Surat, Ahmadabad & Rajkot from 28th May to 10th June 2018.

GPL is aimed at promoting Gujarat’s cricket talent and giving an opportunity to the local players by bringing in national and international cricketers. It is an initiative by Dharmang S Dalal, Director, Luxuryminds Entertainment who accompanied the cricketer at the announcement Press Conference held on 3rd April 2018 at The Gateway Hotel Athwalines Surat.

A total of six former Indian players, 18 international and domestic stars will be in action over a period of 12 days. GPL will have six teams fighting it out for the ultimate glory. Each team will consist of one former Indian cricketer, three former International players, and domestic stars. A total of 18 matches will be played during the course of the tournament and it will commence with a grand opening ceremony, wherein prominent Bollywood stars will be seen performing.

All the matches will be played in Surat, Ahmedabad, and Rajkot. While Surat will host 7 matches including the grand finale, Rajkot and Ahmedabad will share six and five matches respectively. The team which will win the mega tournament will get a cash prize of Rs 51 Lakh, while the runners-up will earn a cash prize of Rs 21 Lakh. Also, each participating team will get Rs 2 Lakh in addition to the entire prize amount.

In the words of Mohammad Kaif, “Congratulations to Dharmang for coming up with this great initiative of a state-based T20 tournament. I’m extremely excited and delighted to be a part of Gujarat Premier League and looking forward to playing this tournament. I expect this league adds more dimensions to cricket and brings out the best in the cricketers who will be participating in GPL. ”

According to Dharmang S Dalal, Director, Luxuryminds Entertainment, “I have been very passionate about cricket since childhood and this is the reason why we came up with the idea of Gujarat Premier League. With cricketing legends like Mohammad Kaif, Brain Lara, Andrew Symonds and many more we aim at giving the cricket fans an avant-garde experience of T20 matches. Power-packed with not only the legends of yesteryears, these thrilling matches will showcase some of the finest cricketers of Gujarat.”