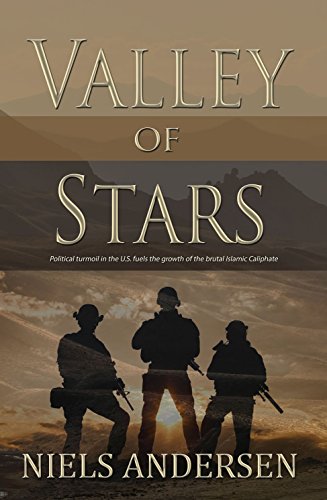 Valley of Stars, by Niels Andersen, thrusts the reader into the brutal and unforgiving battle against the jihadist Islamic Caliphate.

Lakeville, MN, USA — In Niels Andersen’s Valley of Stars, watch Staff Sergeant Shirin Kirkorian, nicknamed “The Lioness,” an intelligence asset and first female to complete Ranger training and Lieutenant Colonel Abdul Qadir, a Shia, unique among Afghan officers race to find a place in the Afghan mountains called the Valley of Stars. A treasure trove of precious metals, the Valley could fund Islamic extremism for generations and ignites a ferocious struggle to secure it. The fighting could engulf the world in a gripping story of faith, conflict, intrigue, and heroism.

The tentacles of the Caliphate’s violent ideology expand across the globe and blur the lines between ally and enemy. The twisting confluence of Islamic extremism, politics, and war force the players to battle both external and internal enemies. As the scope and ferocity of the fighting expands across Afghanistan, it threatens to engulf the whole world in a gripping story of faith, conflict, intrigue, and heroism.

Author Niels Andersen is a retired Air Force Lieutenant Colonel whose career took him to operating theaters around the world. From desert sands to the storied halls of the Pentagon, he taps a deep well of experience working on long range national and military strategy. As an amateur military history and strategy buff he draws on past and current events to shape his stories and blur the lines between fact and fiction. He hopes this is the first of several books in a series that highlights the extraordinary work of ordinary people in the relentless pursuit of our national defense.

Niels lives in Minnesota with his wife and family cat. In addition to writing, he works with recovering and at-risk adults to help them rejoin the competitive workforce. Between work, writing, and helping his wife with her quilting projects, he keeps very busy.