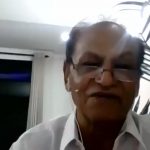 “India & Indians excel when they face challenges”. Said Professor J.D.Agarwal, while delivering the valedictory address at IIF International Research Conference and Awards Summit 2020 on 29th September, 2020. Prof. J.D. Agarwal, Chairman & Distinguished Professor of Finance, Indian Institute of Finance, INDIA; Editor-in-Chief, Finance India, INDIA. According to him whenever India has faced any problem they have emerged winner and excelled in every situation.

Speaking on Banking, Prof. Agarwal said that Banking situation all over the world is deplorable due to COVID 19, despite government giving thousand of crores funding to the banking institutions. He strongly advocated reforms in the banking sector. He is op the opinion that Indian Banking system has excellent banking structure however unfortunately procedures have made the system inefficient and ineffective for various reasons. . According to him COIVD 19 would further pose a challenge to banking system in India, as NPAs are bound to increase to 12 to 15%.

While speaking on Money, Prof. Agarwal said that money is needed in the hands of people for transactions, precautionary and speculative purposes. COVID 19 has forced individuals, organisations and industry to hold more cash in hand. According to him the total cash in hand of people was 18 Lakhs crore before demonetisation which fell down to 15 lakhs crores after demonetisation which has now gone up to 23 lakh crores despite government push for digitisation.

Speaking on Capital markets. Professor Agarwal, said that the capital market is booming despite initial fall immediately after the lock down was declared. He outlined various reasons for the boom in the stock market.

Prof. Agarwal strongly felt that while the government has been sensitive and concerned for every sector in the economy including people (aam adami), Education unfortunately escaped the attention of the government and the Finance Minister as if trusts and societies running educational institutions- schools and colleges are richer than the governments. There is a need for a financial package for institutions including concessional loans to educational institutions. According to him more focus and attention of government is needed on education sector as future of the country lies on the young population which is presently going to schools and colleges and have been affected badly due to Covid lock downs. Schools and colleges should be opened as early as possible of course maintaining the restrictions. As long lockdowns and students staying home may have psychological impact on their health.

Speaking on jobs lost due to lock downs, Prof. Agarwal said that job market would revive in due course. According to him, governments should adopt digitalisation of availability of jobs and needy personnel. The theory employment and growth developed by the Institute and published in Finance India can be used for the purpose by setting up National Labour Exchange. He appreciated the steps taken by Government of U.P. and also the Government of Delhi.

Prof. Agarwal said that In India the number of cases as well rate of deaths Proportionately, far lower as compared to other developed countries despite population having low per capita income and low literacy level is primarily due to use of herbs and “Daadi ke Nuskhe” being followed by public to fight COVID till proper vaccination comes in the market to help increase immunity and fight Corona Virus.He appreciated the government’s efforts in this connection.

Professor Agarwal said this is the first time such awards have been instituted and felt honoured while conferring these awards.

The three day conference in virtual form ended with a vote of thanks to the chair, speakers, guests, research scholars, awardees and delegates, at 11.30 pm.

The Conference is chaired and moderated by Prof. Aman Agarwal, Professor of Finance & Dean (IR) Indian Institute of Finance (www.iif.edu) and Executive Editor, Finance India (www.financeindia.org) for all the three days.

The Third day of the conference was attended by over 250 global participants on Zoom, Facebook and Youtube from USA, UK, Sri Lanka, Turkey, Canada, Indonesia, France, Germany, UAE, Singapore, India and others.