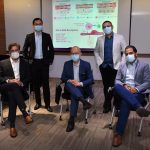 HCC, or primary liver cancer, is the sixth most common cancer in the world, and the second most common cause of cancer deaths globally. It is estimated that approximately 80% of all HCC are found in Asia. Tumours represent a complex ecosystem of diverse cell types that exhibit molecular and functional heterogeneity and plasticity. Previous studies have noted the similarities between embryonic development and tumours, specifically in the expression of fetal-like antigens in cancers. Most notably, alpha-fetoprotein (AFP) is one of the key onco-fetal proteins found to be elevated in more than 80% of HCC, especially in those with poorly differentiated cell types which are clinically more aggressive. The fetal immune system and placental-fetal system are known to be largely immunologically tolerant, allowing their co-existence within the mother until birth. It has long been suggested that cancers may have similar mechanisms to avoid rejection by the body. While it is known that HCC can undergo onco-fetal reprogramming, the relationship between HCC and its micro-environment has not been examined in detail.

In this comparative study, the researchers mapped approximately 200,000 single cells in the human liver across the timeline from fetal development to terminal liver cancer. It led to the discovery of two new fetal-associated cell types in the tumour ecosystem in HCC. Specifically, the team identified the reappearance of fetal-like endothelial cells that are responsible for blood supply, and fetal-like macrophages, an immune cell type that serves as the body’s first line of defence against pathogens, but are also associated with tissue homeostasis.

The researchers discovered that during development of the fetal liver (a process that shares many characteristics typically associated with cancer growth), these cell types (fetal endothelial and macrophages) help in organ growth and protect the tissue against the body’s own immune system. The team identified the sequential activation of VEGF and Notch signalling pathways that led to fetal-like reprogramming of endothelial cells and macrophages. Importantly, the authors showed that these signalling pathways are activated during fetal-liver growth, and switched off thereafter, but are re-activated during the development of liver cancer.

A dividing cancer cell first activates VEGF pathway in endothelial cells, which in turn communicate with macrophages in tumours via Notch-Delta interactions. The fetal-like programme in tumours allows uncontrolled growth and protection from the immune system. This study provides unprecedented and fundamental insights into the processes that drive cancer development, and may provide new therapeutic strategies to re-activate the immune system in the fight against cancer.

Dr Ramanuj DasGupta, cancer biologist and Senior Group Leader at GIS, and the lead corresponding author of the study, said, “Our research underscores a fundamental understanding of how early developmental processes can be hijacked by cancers in order to facilitate their own growth, and escape immune surveillance. This study also opens up exciting possibilities for the discovery of biomarkers and novel therapeutic targets associated with non-malignant cells, especially in the context of combinatorial immunotherapy with anti-angiogenic drugs. Most importantly, it highlights the power of like-minded scientists and clinicians coming together to solve big problems. I am absolutely thrilled to be working with this dream-team of exceptional scientists and clinicians.”

Dr Ankur Sharma, Research Scientist at GIS, the first and co-corresponding author of the study, said, “Our research provides insights into the mirror worlds of fetal and tumour ecosystem, where certain cell types first appear during organ development and later reappear in cancer. The ‘reappearance’ of fetal-like cells provides the perfect environment for tumour growth by supressing the immune system. Our work demonstrates the importance of embryonic macrophages in tumour growth and immune suppression. This study opens new avenues to understand the embryonic origin of cancers and its implication in discovering new therapeutic approaches, especially in the realm of immunotherapy.”

Dr Florent Ginhoux, scientist and Senior Principal Investigator at SIgN, and co-corresponding author of the study said, “The macrophages are one of the first immune cells to arise during development as their raison d’être is to provide adequate organ building and tissue maintenance. These embryonic macrophages are endowed with immune-suppressive properties as inflammation too early would be detrimental to the correct development of fetal tissues. Our work uncovers that tumour cells exploit embryonic macrophage’s raison d’être for their own growth, by recreating an artificial fetal-like environment and taking macrophages ‘back in time’ mimicking early developmental settings. This study will help to understand the importance of macrophage ontogeny in cancer development and open new strategies to eradicate cancer.”

Prof Pierce Chow, Clinician-Scientist and Liver Surgeon at NCCS, Principal Investigator of the NMRC TCR Flagship Programme in Liver Cancer, and co-corresponding author of the study, said, “This study provides mechanistic confirmation of what many liver cancer specialists have suspected – regression to a fetal state allows HCC to grow aggressively. The findings potentially opens up new approaches in the prevention and treatment of HCC. It is also a showcase of what multi-disciplinary collaborative research between clinician-scientists from different specialities and scientists with different expertise can achieve.”

Prof Chow who is also a Programme Director with Duke-NUS Medical School added that he may include the investigation for proteins uncovered by this study in a prospective cohort study of patients at high risk of developing liver cancer, which has been planned to start at the end of 2020.

Prof Jerry Chan, Clinician-Scientist and Senior Consultant at KKH’s Department of Reproductive Medicine and co-author of the study, said, “Globally, cancer cases have risen rapidly over the years. Understanding the behaviour of how cancer cells reprogramme their environment to simulate a fetal environment, and thereby promoting their growth and avoiding immune destruction, may be key to developing a cure. KKH is proud to contribute to this novel discovery through underlying expertise in the developing fetal immune system, in collaboration with A*STAR and others.”

Prof William Hwang, Medical Director at NCCS, said, “Indeed, the multi-institutional collaboration has allowed the team to leverage on each other’s expertise, leading to the discovery of onco-fetal reprogramming in liver cancer. I’m glad we are one step closer to understanding and treating liver cancer.”

Prof Patrick Tan, Executive Director of GIS, said, “The discovery of onco-fetal reprogramming in liver tumours opens up new avenues of investigating this process in other cancers and inflammatory diseases. This work also demonstrates the power of single-cell and spatial genomics in uncovering fundamental biological insights. It is a true example of ‘SG United’ where scientists across the different Singapore institutions formed a team to discover new biological processes with translational implications in the clinic.”