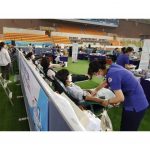 In July, the members of Shincheonji’s Daegu branch who recovered from COVID-19 agreed to donate plasma for COVID-19 treatment research. Hundreds took part in the plasma donations that month. Earlier this week, the Korean Center for Disease Control released a statement thanking the Shincheonji Church for its help and requesting its cooperation for another round of large-scale plasma donations:

During this situation where the whole world is at risk due to COVID-19, we thank Shincheonji Church of Jesus (Chairman Lee Man Hee) for actively cooperating with the needed group collection of plasma for coronavirus treatment research in July. Currently, COVID-19 cases have been resurging, and there is a request for the rapid development of a treatment by employing group collection of plasma. Thus, we desire to collect plasma through your organization and request for your active collaboration.

Affected Shincheonji members in Daegu agreed to donate, and a facility was set up for over 1,100 donors to donate plasma between August 26th and September 4th, 2020.

Unfortunately, South Korea is currently facing its second and largest major COVID-19 outbreak. Pastor Jun Kwang-hoon of Sarang Jeil Church in Seoul, a vocal opponent of South Korean President Moon, skirted government opposition and public health concerns to hold a large rally against Moon. Pastor Jun Kwang-hoon spoke to the crowd without a mask despite having the coronavirus.

The outbreak that occurred at the Sarang Jeil Church was at least ten times the size of the outbreak at Shincheonji’s branch church in Daegu six months before. Sarang Jeil joins a growing number of protestant churches that are refusing to comply with the government mandate.

When the COVID-19 outbreak occurred at Shincheonji’s branch church in Daegu, the government followed protocol by requesting church members’ personal information for contact tracing. Shincheonji Church provided the information of Daegu church members immediately, as well as an updated list the following day.

Although Shincheonji officially halted all church meetings and gatherings as soon as the outbreak occurred, public outrage was sparked at the news of the outbreak; rumors and worries went around that Shincheonji members were spreading the virus on purpose. Sensationalistic headlines that combined the public’s fear of a “cult” with its fear of the coronavirus sent the public into a frenzy.

The Korean Government then requested a third list, this time containing Shincheonji Church’s full membership domestically and internationally, and even members-in-training. Shincheonji Church did its best to comply with the government’s requests, and Korean Minister of Health Kim Kang-Lip has publicly stated that Shincheonji cooperated fully with the government. However, Shincheonji’s opponents launched allegations that the church did not cooperate fully and those allegations are being brought to court. Consequently, several Shincheonji leaders, including the founder, Lee Man Hee, are now detained facing criminal charges.

The United States Commission on International Religious Freedom reported on the harsh treatment faced by Shincheonji members, and many NGOs and religious leaders have appealed to the United Nations and the South Korean government to call for an end to the oppression. However, there has been little reprieve and the South Korean government has not commented on the request. Shincheonji’s Chairman, Mr. Lee, is still detained indefinitely as he awaits the prosecution. Meanwhile, Pastor Jung of Sarang Jeil Church has not been detained or charged.