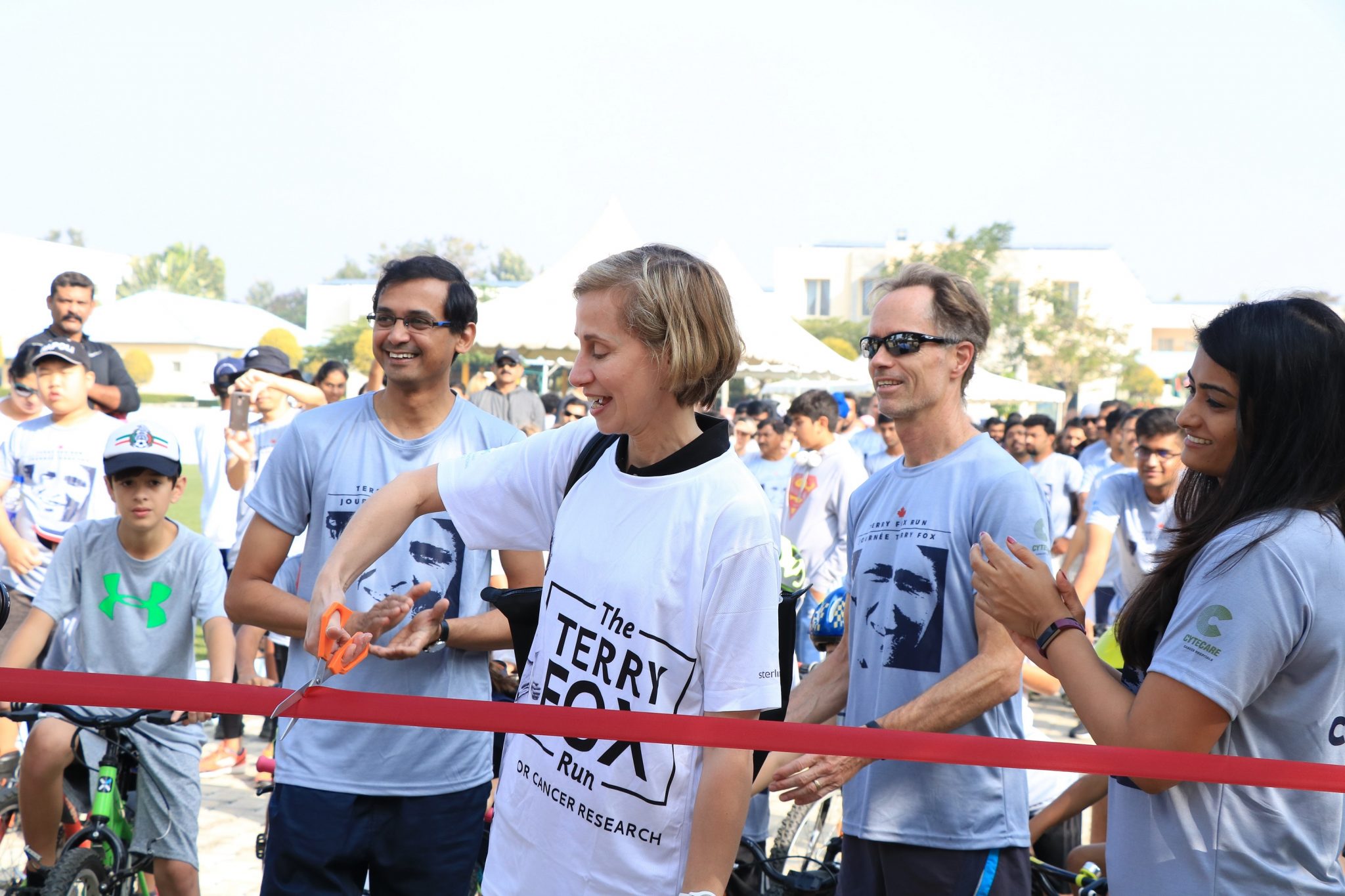 In the memory of a young hero who fought cancer, and helped others along the way

Bangalore, December 10, 2018: Canadian International School (CIS) hosted its 7th consecutive Terry Fox Run in association with the Terry Fox Foundation at its campus in Yelahanka, Bangalore. The event raised around 3 lakhs which will be sent to the Terry Fox Foundation. The run is conducted in the memory of Canadian athlete and cancer patient Terry Fox who was diagnosed with osteosarcoma (bone cancer). He embarked on a run aptly titled the ‘Marathon of Hope’ to raise funds for cancer research. Although he succumbed to the disease, his legacy lives on.

The run at CIS saw over 1000 participants from various schools, colleges, corporates, and hospitals across Bangalore. The run commenced with a few words from the chief guests; Ms. Nicole Girade, Consul General for Canada in Bangalore and Mr. Suresh Ramu, Co-founder and CEO, Cytecare Cancer Hospitals.

“In 1980, Terry Fox captured our imagination with his cross Canada Marathon of Hope to raise awareness and funding for Cancer research. His legacy is that Marathons of Hope are carried on by others around the globe every year, including here in Bangalore, to continue to raise awareness and funding for the cure.” said Ms. Nicole Girade, Consul General for Canada in Bangalore.

“Terry Fox and his ‘Marathon of Hope’ to raise funds for cancer research was resonant not only with Canadians, but also with the rest of the world. This year’s Terry Fox Run at Canadian International School was the largest ever with over 1000 participants. The response was overwhelming and the support we saw in keeping Terry’s legacy alive was absolutely fantastic.” said Ms. Shweta Sastri, Managing Director, Canadian International School.

“It’s wonderful returning at CIS for yet another successful Terry Fox Run. It is important to create awareness and raise funds for cancer research. Thank you CIS for your perseverance for the last 7 years and I am sure this will go on for the next couple of decades.” said Mr. Suresh Ramu, Co-founder and CEO, Cytecare Cancer Hospitals.

Back in 1980, no one in Canada thought it possible that a young man with a prosthetic leg could run a marathon a day, every day….but Terry did. This Canadian athlete was audacious enough to take on one of the most diabolical enemies known to mankind, cancer. What Terry Fox achieved, struck a chord with Canadians. His efforts inspired millions, and the Terry Fox Run took off and has not looked back since.

Terry Fox, an active teenager involved in many sports was only 18 years old when he was diagnosed with osteogenic sarcoma (bone cancer) and forced to have his right leg amputated 15 centimetres (six inches) above the knee in 1977. While in hospital, Terry was so overcome by the suffering of other cancer patients, many of them young children that he decided to run across Canada to raise money for cancer research. Terry started his run in St. John’s, Newfoundland on April 12, 1980 with little fanfare. Although it was difficult to garner attention in the beginning, enthusiasm soon grew, and the money collected along his route began to mount. He ran close to 42 kilometres (26 miles) a day through Canada’s Atlantic Provinces, Quebec and Ontario. However, on September 1st, after 143 days and 5,373 kilometres (3,339 miles), Terry was forced to stop running outside of Thunder Bay, Ontario because the cancer had spread to his lungs. Terry passed away on June 28, 1981 at the age 22. The heroic Canadian was gone, but his legacy was just beginning. To date, over $750 million has been raised worldwide for cancer research in Terry’s name through the annual Terry Fox Run, held across Canada and around the world.