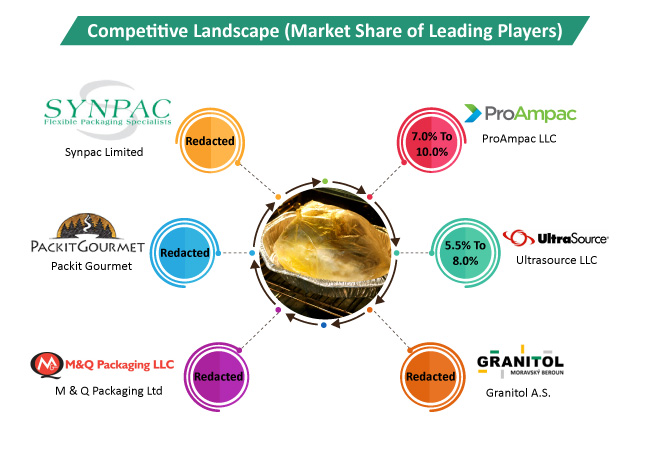 Cook-in-bags are fast permeating the retail outlets, as part of strategy to curtail food poisoning linked with high levels of bacterium campylobacter, witnessed particularly in fresh poultry. High temperature-resistant film that combined simplicity with practicality is a key development area of leading cook-in-bags manufacturers, to meet the demand uptake in retail stores. Despite retail sales of cook-in-bags being significant, market revenue share of institutional cook-in-bags sales continues to remain incontestable, according to a recent FactMR study.

The study envisages the Cook-In-Bags Market to record an impressive 6.2% value CAGR between the period of forecast, 2018 and 2028. Institutional sales of cook-in-bags market will continue to hold leading revenues shares of the market. Volume sales of cook-in-bags in institutions are estimated to be nearly 1.5X that of retail sales during the period of forecast. Temperature-resistant cook-in-bags have been fast gaining momentum in institutional settings, wherein demand is driven primarily by sales of marinated raw or precooked meats.

“Prominent manufacturers of cook-in-bags are concentrating on enhancing the compatibility of cook-in-bags to extend its use beyond boiling in water to microwave. Current designs of cook-in-bags feature both cooking as well as storage properties, and are produced using materials that are devoid of dioxin or BPA. Special vacuum seals that aid in retaining moisture in food products and prevent food spoilage are also a key feature of new cook-in-bags designs. These developments have further spurred their adoption in retail outlets and institutions alike. Multifunctional cook-in-bags, capable of microwaving, boiling, and freezing, are becoming the new focus area among manufacturers such as Packit Gourmet LLC,” says a lead analyst at FactMR.

The report foresees plastic to remain preferred material used for the production of cook-in-bags, mainly in light of its cost-effectiveness and relatively convenient manufacturing technologies. Plastic-based cook-in-bags are anticipated to hold more than three-fourth revenue share of the market during the period of forecast. However, a slight drop in the revenue share is estimated for the plastic-based cook-in-bags over 2018 to 2028. This can be mainly attributed to the government norms, which limit the boiling time of cook-in-bags to 20 minutes, as heating or boiling further will result in melting of polyethylene and plastic residue in food products. Additionally environmental concerns regarding plastic will further remain a key demand deterrent for these cook-in-bag variants.

To get more Information on Cook in Bags Market, Visit – https://www.factmr.com/report/1577/cook-in-bags-market

The International Energy Agency (IEA), and the Organization for Economic Co-operation and Development (OECD) have estimated that the population in rural areas use nearly 2 tons of firewood annually, for the purpose of cooking. This process has long-prompted chronic respiratory diseases and worldwide surge in deforestation. This has further led to a rise in mortality rates worldwide. All these factors have encouraged the use of alternatives that complement environmental sustainability norms, while reducing the cooking time required for consumers, and cook-in-bags have been deemed as one of the most prominent alternatives. All these factors point at bullish future prospects of the cook-in-bags market, whose size has been estimated to surpass US$ 500 Mn by 2028-end.

Sensing evolving requirements of end-users, manufacturers have developed cook-in-bags across wide range of packaging sizes. 240X380 to 380X500 mm cook-in-bags are likely to remain top selling size variant, complemented by steady demand from 150X240 to 240X380 mm cook-in-bags. However, sales of latter are projected to grow at a comparatively faster pace than the former through 2028.

Cook-in-bags have sought extensive adoption across a wide range of applications, with frozen foods expected to continue leading with over half revenue share of the market over the period of forecast. Ready-to-eat meals will also remain a lucrative application area of cook-in-bags, which can be attributed to changing consumption patterns of consumers in tandem with their increasingly fast-paced regime.