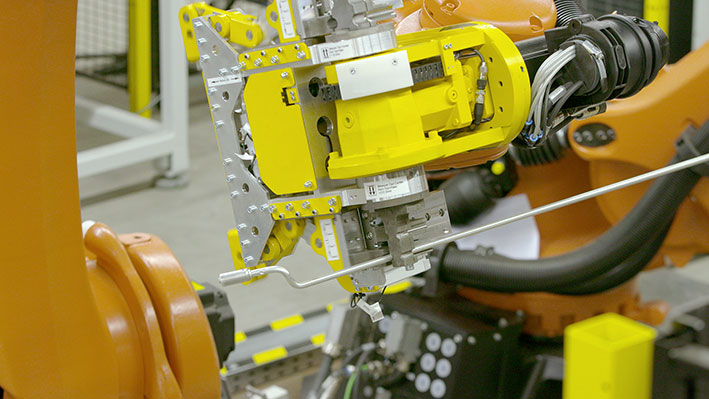 When the requirements are complex, a solution is required that provides dynamic and diverse results. And sometimes, this can also lead to several results, like in the case of transfluid Maschinenbau GmbH’s current project. In this case, the special developed automation system bends 6 m long pipes with small diameters at a consistently high speed. Simultaneously, the transfluid production unit is capable of producing shorter pipelines of 500 mm featuring diverse bending geometry in large quantities. Handling the coated pipes during the process is also demanding. Because of the sensitive surfaces, special care and treatment are required during processing.

Chain conveyor and clever encoding
To ensure that production can be implemented safely, quickly, and thoroughly, transfluid has equipped two robots that are used as bending machines with different magazines. One magazine is a so-called “chain conveyor”. It guides long pipes to the bending robot. According to the markings placed on the pipes by the encoding beforehand, the robots are able to detect which geometries need to be produced. In this case, they are capable of bending a long pipe from one side to the centre. Following processing, the workpiece is placed on a slide.
The bending cell also possesses a separate step conveyor. This feeds in short pipe lengths, including two different pipes if this is required. Depending on the case at hand, each robot processes a different geometry or pipes with another diameter. This enables a large series of short components to be processed efficiently at the same time.. Long components can be processed just as effectively.

For high versatility
“An additional challenge for the development of our solution was that all the pipes have previously end formed ends on both sides or they already have cutting rings mounted ,” explains Stefanie Flaeper, General Manager at transfluid. “With robot technology, bending geometry may be started at an extremely short distance from the bend on both previously mounted ends. And the process, i.e. preparing the ends first and then bending, is able to be implemented consistently for any pipe with this bending technique.”
This makes prior processing of the ends significantly cheaper and faster . Because of this process, there are no geometric limitations, and the pipe canbe sealed beforehand with caps. This makes it immediately available for use after bending.

Data file for bending directly from the CAD system
In addition to flexibility, an additional strength of the automation system offers another advantage that cannot be underestimated: The robots do not need to be programmed. As with any conventional bending machine, the necessary data may be loaded into the bending robots with a data file directly from the CAD system and transformed into a bending geometry. This makes the psychological barrier raised by programming a thing of the past. The systems are also able to be linked online with all relevant measurement systems.
To learn more about how to make pipe machining faster and more commercially effective, visit transfluid at the Tube 2018 trade fair in Hall 5 at Booth G34.